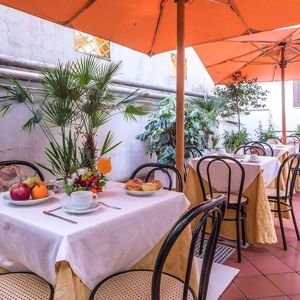 Hotel near the basilica of Sacro Cuore di Gesù

Hotel near the basilica of Sacro Cuore di Gesù

The Hotel Lux Hotel is close to the Basilica of Sacro Cuore di Gesù, one of the churches most loved by religious worshippers, because the founder of the Salesians, Don Bosco, stayed here.

The church is located in the Castro Pretorio district and, in 1921, at the behest of Pope Benedict XV, it became a Minor Basilica. Its construction began in 1870 but soon stopped due to the annexation of Rome to the Kingdom of Italy. Thanks to Don Bosco's iron will, the work was resumed again in 1880. The basilica was completed by the architect Francesco Vespignani in 1887.

The basilica has a Neo-Renaissance style façade, while there is a statue of Christ the Redeemer on the bell tower. The interior has three naves divided by granite columns. Inside the chapels, there are paintings by Andrea Cherubini. Don Bosco stayed in the building next to the church from 1881 to 1884. In fact, to the rear of the church, there is a space that bears witness to the Saint's stay there. It is a large room in which Don Bosco stayed during his last trip to Rome and is also known as "Don Bosco's rooms".

It was right here that Don Bosco performed two interventions: he cured a seminarian of deafness and healed a lady who had a paralysed arm for years. In the aftermath of the path of sanctification of Don Bosco, these places became a destination for continuous pilgrimages. Today, they still attract numerous pilgrims, who can also view a large showcase containing objects used by Don Bosco.

The Basilica is open every day from 6 am to 12 noon and from 4 pm to 7.30 pm. You can get to it from the hotel in 7 minutes (550 metres away) by walking along Via Gaeta towards Via Castelfidardo, Via Volturno and Via Marsala.